We are always open for call 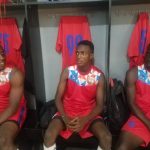 Abdulrahman Bah, a player on loan to SLIFA is being eyed by one of the top flight Premier League teams.
Abdulrahman Bah is one of the youngest players in the Sierra Leone Premier League that has lately attracted the attention of big football clubs in the country because of his skills and ability in playing the ball.
SLIFA, before the arrival of Bah, was struggling in the relegation remit, but since his inclusion into the SLIFA line up from Sierra FC, Bah has proved to be a worthwhile asset to the team’s prowess in the Second Division as his added skills and tactics blended with those of his teammates; Michael Bangura Jr and Mohamed Kanu has elevated SLIFA away from the relegation zone.

According to the Head Coach of SLIFA, Tamba Ngongou, he is very pleased with the performances of the duo loaned from SLIFA, as their individual and collective contributions to the team have heightened morale and team spirit among the players. “I hope they will perform more better in the second rounds,” he stated.
According to Abdulrahman Bah he is not just looking to play for big clubs in the country but to play professional football that will benefit Sierra FC and the country.
He has expressed thanks and appreciation to the CEO for Sierra FC for the support he and his colleagues are getting and prayed that one day soon, he will benefit immensely from his kind gesture.